We've had a fun week poking around Isla Isabela. We rented bikes and rode up to a tortoise sanctuary above the desert. The tortoise population was nearly extinct after the whalers had their way with the islands in the 19th century. So they're raising juvenile tortoises to be released into the wild. The tortoises are living in paradise with full access to mango, banana and papaya trees/fruit. The sanctuary is actually cutting down some of the trees because the tortoises are becoming morbidly obese. All they need are some native grasses. Ridiculous.

We went SCUBA diving again and had more awesome manta ray sightings, hammerhead sharks, and the best turtle viewing ever. We were swimming in between two currents, a place where warm and cold water meet, so lots of critters showed up. We had a dozen green sea turtles meandering around us in circles and thousands of reef fish swimming in huge schools just cruising right on by our masks.

The sea lions and Galapagos penguins have been frequent visitors to Pau Hana. They love to pig out on the tiny fish that hide in the shadow of the boat. It's been some my favorite wildlife moments of the trip. One little sea lion likes to climb onto the paddle board, but as soon as she sees us, she evacs, so no pictures of that, yet.

Many boats are getting ready to leave this week and start their crossing to Marquesas. We're not in any hurry but our permit expires on Friday, so we'll continue getting ready to go this week and hope that the trade winds come a bit more north toward us, otherwise we may be looking at about 400 miles of motoring as we start our trip. Cheers! 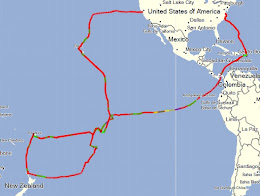